We all know the temperature is red-hot in Miami.  In 2007, the temperature rose when a new production came to town.  With sexy stars and massive explosions, Burn Notice raised the climate in Miami to white-hot. 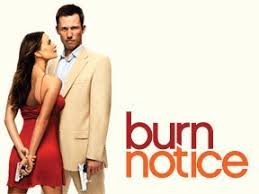 Burned by the U.S. government, former spy Michael Westen (Jeffrey Donovan) wakes up bruised and sore in a run-down Miami motel with no memory of how he got there.  Freezing bank accounts and assets, and deleting the agent’s entire job history are just a few of the government’s little tricks when burning an agent.  With nothing, Michael turns to his family and friends for assistance as he takes on odd jobs for money, mostly utilizing his background as a spy to take down drug cartels, find kidnapped victims, and handle any other sticky situations that require his expertise.  The news of Michael’s success as a private investigator quickly spreads throughout Miami, and he’s known as the go-to guy for anyone finding themselves in a bind.  The numerous requests for his help often interfere with his only goal – discovering the truth behind his burn notice. 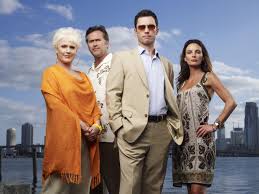 On a personal note, Michael has a hard time letting anyone get close to him, undoubtedly due to his life as a secret agent.  Michael every so often lets down his emotionally hardened wall to friends and family, and he reveals a vulnerable side.  He can’t refuse to help his loved ones out of trouble, regardless of just how deep they’re in.  While his primary goal is to unravel the mystery behind his excommunication from the government, Michael will do anything necessary to keep his close circle of loved ones safe.

Michael first enlists an ex-navy seal buddy, Sam Axe (Bruce Campbell), to help him uncover the truth behind his burn notice.  Since retiring, Sam’s life has been focused on women and booze.  Sam often refers to his conquests as “lady-friends”, and these women inevitably provide Sam with cars, money, and rich bungalows that he lends to Michael for use during their freelance work to interrogate suspects, hide clients, or even hide themselves.

Despite his friendship and loyalty to “Mike” (Sam’s the only one who calls Michael by the commonly used abbreviation), Sam was forced to inform on Michael to the FBI, but Sam found a way to only report “half-truths” to the feds, with Michael’s help of course.  After some of Michael’s file mysteriously vanished, the FBI’s no longer needed Sam’s help.  Undercover, Chuck Finley (Sam’s alias) uses his knowledge of the American government to obtain the necessary information for Michael’s task at hand.  With his training as a Navy SEAL and his brilliance with tactical plans, Sam proves to be a valuable asset for Michael and the team.

The second member of the team is Michael’s ex-girlfriend and former IRA agent Fiona Glenanne (Gabrielle Anwar) who doubles as an arms dealer and a bounty hunter.  Fiona loves to blow things up and always jumps at the chance to build and plant explosives.  Fiona and Michael first met while he was undercover as an operative, and his abrupt departure (his cover was blown) has always haunted her.   She wants nothing more than to rekindle her relationship with Michael, and even uses his mother against him at times.  Fiona’s sharp-tongue and quick-wit make for some of the best banter between the characters.  She has a love/hate relationship with Sam, and really only tolerates him because of his loyalty to Michael.

Not quite a member of the team, but always in the middle of things, is Michael’s chain-smoking mother, Madeline Westen (played by the great Sharon Gless).  Madeline hovers over Michael, always reminding him that he was never around when the family needed him most: he didn’t attend his father’s funeral, he doesn’t help his brother (who happens to be a train-wreck by the way), and he never tells her what she wants to know such as where he’s been all these years and why he always flees when she needs him most.  Regardless, Madeline loves her son and does whatever necessary to keep him close by.  One of Madeline’s favorite tricks is to insist that Michael help her friends, and in return she too joins the team now and then by going undercover to aid her son and his friends.

The fourth and newest member of the team, Jesse Porter (Coby Bell) is a counterintelligence agent accidentally burned by Michael.  Not knowing Michael was responsible, Jesse approaches Michael and asks for his help uncovering the truth behind his very own burn notice.  Feeling guilty, Michael not only invites Jesse to join the team, but he also offer’s Madeline’s garage to Jesse as a safe place to stay.  It’s not long before Jesse puts two and two together, and though he ponders killing Michael, he ultimately rejoins the team after Madeline tricks her son and his friend into talking it out.

Last season ended with Michael arriving in Washington, D.C. and coming face to face with a man who greets Michael with a cold, “Welcome back.”  Will Michael’s burn notice be lifted?  Will Michael and Fiona grow their relationship as a couple, or will Michael continue to push her away?  Will Jesse’s obvious feelings for Fiona pose as an additional threat to Michael & Fiona’s future, or will he graciously step aside?

Burn Notice is one of the best, and definitely the sexiest show on television.  To add fuel to the fire, Jeffrey Donovan might just be the sexiest man on TV.  Does anyone else make eating yogurt look so yummy?  When he throws on those sunglasses and flashes that crooked smile, he has women melting in their living rooms across the U.S.

Not to leave the men out, many argue that Gabrielle Anwar is indeed the sexiest woman on TV.  C’mon guys, doesn’t it have something to do with her love of guns and explosions, or is just her smokin’ hot body?

And, not to deny their sexiness, Bruce Campbell rocks Sam’s Hawaiian shirts unbuttoned down his chest, and he wears a pinky ring like no other.  Oh, and Coby Bell?  He’s quite the sight for sore eyes.

Is this enough for you to check out USA’s hit?  Tune in this Thursday, June 23rd for the season premiere.

Are you a Burn Notice fan? Who’s your favorite character on the show and why? Do you watch because of the sexy cast, the compelling and action-packed story lines, or for another reason?  Do you think Michael and Fiona can survive a relationship, or does the show need to continue to play a cat & mouse game to keep it interesting?  I’d love to hear from you!

Stay tuned after Burn Notice for the season premiere of Suits on USA.

Remember to stop by the #DevilColony hashtag in Twitter today to celebrate James Rollins’ new release – The Devil Colony.