Last week, I mentioned that we have some changes coming to Why It’s Worth a Watch Wednesday.  From my years in Corporate America, I learned that most people view change as a bad thing, but that’s not always the case.  Change can be good and exciting.  And yes, change can also be sad.

Today’s news is a bit of both.

Due to the amount of new work opportunities for the other half of this duo, Amber has decided to step down from posting a new television review every week.  She will continue to chime in when she can, as well as publish new reviews when time permits; but for now, she’s saying adieu after almost 100 weeks of Why It’s Worth a Watch Wednesday.

And in typical Amber style, she’s going out in a blaze of Photoshop glory.  As always, there is a link to her post below.  Be sure to click over and wish Amber the best in her future endeavors!

==and now a note for my TV-partner-in-crime==

Amber, I have loved every minute working with you.  Our tastes in television are anything but similar and I feel this is why our blog series has worked as well as it has.  I wish you the absolute best and I am so excited for you.  This is a tad bittersweet for me, but I know you aren’t disappearing forever—thank goodness—so I refuse to get emotional here.  You know how I feel about you—we’re sisters—and I am absolutely blessed to have you in my life.

==now back to the regularly scheduled program==

I contemplated the idea of walking away from my Wednesday reviews as well, but considering I already have the TV addiction AND it doesn’t take that much time out of my week to write a new review, I’m keeping Watch Wednesday alive.

So, as they say in show business… the show must go on. 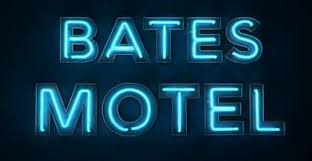 In Bates Motel, we revisit the Alfred Hitchcock favorite… only this time we’ll see how it all began with a young Norman Bates (Freddie Highmore from Charlie and the Chocolate Factory and The Spiderwick Chronicles ) and his very-much-alive mother, Norma (Vera Farmiga from Safe House and Orphan).  Anyone who has seen Psycho understands why Norman is how he is as an adult, but Bates Motel plans to show us more of the sordid relationship between mother and son.

The pilot begins with a seventeen year old Norman discovering the dead body of his father.  Viewers are led to believe that his mother had something to do with his father’s death, but she never admits to the crime, nor does Norman or anyone else accuse her of harming him.  Mother and son pack up and move from Arizona to the small coastal town of White Pine Bay, Oregon to start over, leaving another son, Norman’s older half-brother (Dylan, played by Max Thieriot from House at the End of the Street), behind.

Using the inheritance from Mr. Bates’ insurance policy, Norma buys the recently foreclosed Seafairer Motel and the residence located directly behind it.  She appears very competent, even without experience running a motel, but also very controlling… very controlling, specifically of Norman.

Norman is just a sweet boy who always does as his mommy says… until now.  When a pretty girl from school shows interest in Norman, he sneaks out of the house to be with her.  And of course this one time he acts out, his mother needs him when the angry former owner of the property (Summers, played by W. Earl Brown from Scream) returns, beats her, and rapes her.  However, Norman does return home just in the nick of time to rescue her.  And when Norman leaves the kitchen to fetch the medical kit, Norma kills the intruder… stabs him multiple times in the chest with little to no remorse.  One might think she’s in a state of shock, having just been attacked and forcibly penetrated, but no… I think she’s just crazy; but then again, I’m a Psycho fan and I know she’s crazy.

The sweet and innocent boy that he is, Norman wants to call the local police; but Norma insists otherwise.  After all, “Who is going to book a room in the rape slash murder motel?”

Halfway through the first hour, we have two dead male bodies—both murdered at the hands of Norma… or so we think anyway.  How many more bodies does she have in her closet?  And does the horrendous scar on her inner thigh have anything to do with another body she’s hiding?

Speaking of Norma’s inner thigh brings up a conversational piece of Bates Motel—the relationship between mother and son.  Just how inappropriate is it?  Well, we haven’t seen anything sexual between the two yet, but we have seen Norma undress in front of Norman.  But don’t worry; “It’s not like it’s weird or anything.”  Or so Norma says… 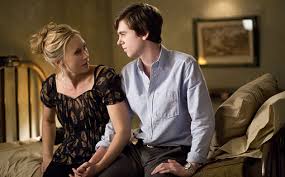 The pilot episode moves fast; Norma and Norman hide the body in one of the motel room showers; they rip up the carpet to cover up the blood stains from when they dragged the corpse in; the local authorities show up, adding to the drama and tension of the situation (Sheriff Alex Romero, played by Nestor Carbonell from Ringer, and Deputy Zack Shelby, played by Mike Vogel from The Texas Chainsaw Massacre); and Norma and Norman dispose of Summers in a body of water, in true Bates and Psycho fashion—and this is all in the second half of the one-hour show.

While ripping up the carpet in the motel, Norman finds a journal hidden beneath the old flooring full of hand-drawn images of a young girl, showering, being watched, and then held against her will and injected with drugs.  At the end of the pilot, viewers see an actual girl being held against her will and being injected with drugs.  There is more to come of this story in the following episodes; but I don’t want to give too much away for those who haven’t watched Bates Motel… however, we are left wondering:  Is this girl real?  And if so, who is holding her and where?  Or is this just another of Norman’s fantasies and hallucinations?  Oh yeah; Norman has fantasies of women being tied up and he also has conversations with people, specifically his mother, when she’s not there.  Uh-oh…

Now three episodes in, I could go on and on about the show… there’s so much we haven’t discussed, including: Dylan hunting Norma and Norman down; Emma, Norman’s classmate with Cystic Fibrosis, who is just as fascinated with the journal of drawings as Norman is; the gigantic marijuana farm; the budding relationship between Norma and Deputy Shelby; and the fact that the Bates aren’t the only abnormalities in the small town … “The people in this town, they deal with things in a different way.  But it gets dealt with.”

Like I said, there’s more to Bates Motel than just the Bates…

I don’t know what I expected from A&E’s new series, but I will say the writers and creators have far exceeded whatever expectations I might have had.  Is Bates Motel the best new show on television?  Probably not… But does it have me wanting more?  Yes!  Therefore, I’m awarding the new Norma and Norman Bates TV show with the JFTV rating.  Instead of comparing it to a bag of greasy potato chips, I’m going to liken this guilty pleasure to a bag chocolate miniatures—one just isn’t enough, but eat too many and our stomachs might flip upside down. 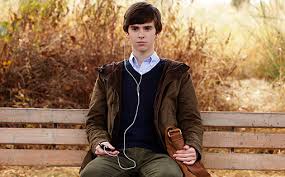 And remember, “Norman is a good boy.”

What do you think?  Have you watched Bates Motel?  I’d love to hear from you!

Be sure to click over to Amber’s blog and wish her the best in her future endeavors!

And come back next week when I take on another new show… I just haven’t decided which one yet.