It’s time again for Catie Rhodes and me to break down another cinematic original and its remake.  Sticking with our usual ways, Catie reviews the original and I take on the remake.  This month we tackle the noir film, A Kiss Before Dying. 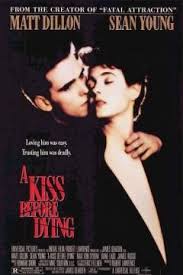 A money-obsessed college student murders his pregnant girlfriend out of fear her rich father will disinherit her.  Then, he goes on to woo her sister, still in hopes of infiltrating the same wealthy family.

I didn’t realize that the 1991 film starring Matt Dillon and Sean Young was a remake until Catie suggested we add A Kiss Before Dying to our Original Vs. Remake series.  So, after a little teamwork, with the two of us researching and seeing which of the two movies we could actually get our hands on, Catie agreed to cover the original and I ordered up my usual—the reboot.

I remembered seeing the remake years ago, probably close to when it first aired on the cable movie channels.  But I hadn’t seen it since and couldn’t remember the details.  I knew the gist—poor boy wants desperately to inch his way into the wealthy family he has kept his eye on his entire life.  Literally.  From watching the copper trains pass behind his house as a small boy, to following the family in the news over the years.  So, I set my DVR and watched it again, ready to take notes.

A Kiss Before Dying is classified as a noir film.  According to Webster, a noir film is a type of crime film featuring cynical, malevolent characters in a sleazy setting and an ominous atmosphere that is conveyed by shadowy photography and foreboding background music.  And like Catie said, sometimes that background music is a bit much…

The 1991 version has been called a neo-noir, a modernized film that uses elements of the film noir genre but with updated themes (music, cinematography, style, visual elements, etc…).  It was all there.  The orchestra music, camera angles, dark shadows, and some things we don’t see as much in films anymore—boobs, sex, and a lot of smoking.  Granted, this film was shot back in the early ‘90s when smoking wasn’t as much a taboo like it is today, but still.  When watching today, in 2013, the smoking stands out.  As does the nudity and sex.  Films today have sexual encounters, but many of these scenes are not shown in detail.  At least in my opinion…

Anyway, the remake stars Matt Dillon as Jonathan Corliss/Jay Faraday, a guy from a not-so-wealthy town ready to get out and never come back, whatever it takes… and Sean Young as twin sisters Ellen and Dorothy Carlsson, heirs to the Carlsson Copper company, who find themselves stuck in a Corliss/Faraday web.  I’ve never been a big fan of Sean Young, unless you count her role in Ace Ventura: Pet Detective (LOL), but I’ve liked Matt Dillon since the first time I saw him in The Outsiders.  Perhaps his movie selections don’t land him a lot of award nominations, but let me just say this, he nailed the role of a sociopath in A Kiss Before Dying.  Nailed it.

The character of Jonathon is very calculating, controlled, and purely evil.  He takes risks but minimizes his chances of being caught.  And man, he is violent… he’ll push a pregnant woman from atop a building, strangle a man equal to his size or bigger without breaking a sweat, and he doesn’t hesitate to watch the life drain from anyone.  Yet, he’s superficially normal in social settings.  Matt Dillon may be cute, but he is uber-creepy in this film. 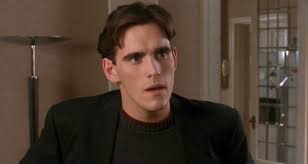 Like I said earlier, I had seen this movie before.  And despite not remembering much about it, I didn’t find it at all suspenseful.  Perhaps that’s the noir aspect… the music just gives too much away in my opinion.  I knew something bad was about to happen or someone was about to bite it before it actually aired on the television screen.  Plus, when the mystery begins to unravel, it does so very quickly.

Now, I’m not saying I didn’t enjoy this film.  Take for instance the story… I truly appreciate how everything comes full circle, from the opening scenes of the small boy watching the trains pass by, to the very end when Dorothy is running for her life.  I haven’t read the book by Ira Levin, but I have to assume he deserves the credit for this.

So how does the 1991 version compare to the original?  I can’t tell you… but I can say that I want to watch the 1956 film for one reason—Robert Wagner.  I’ve had a crush on him since I was a little girl.  Hart to Hart was one of my favorites growing up.  He was such a beautiful man back in the day; heck, he’s still not so bad… I simply must see him play Jonathon/Jay. 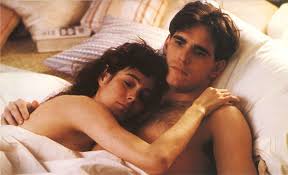 But back to the remake… I think the 1991 film is worth watching for Matt Dillon.  His performance surprised me the most.  I just wouldn’t expect to be clinging to the edge of your seat in suspense.  Other psychological thrillers have gotten me a lot more than A Kiss Before Dying did.

What do you think?  Have you seen either the original or remake of A Kiss Before Dying?  If you’ve seen both, which do you prefer and why?  If you haven’t, do you want to?  I’d love to hear from you!