It’s time again for Catie Rhodes and me to break down another cinematic original and its remake.  Sticking with our usual ways, Catie reviews the original and I take on the remake.  This month we tackle the classic western, 3:10 to Yuma. 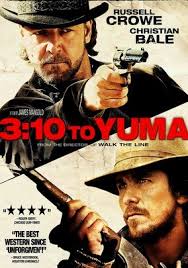 First, let’s check in with Catie’s Homemade Summary that applies to both the 1957 and 2007 versions:

A timid rancher who is down on his luck finds himself responsible for making sure a smooth-tongued outlaw does not escape justice.

Catie and I both stepped out of our comfort zones for these reviews.  But since our readers actually suggested 3:10, we decided to give it a shot.

Before I begin, let me just say why I requested the remake.  Regardless of how ashamed I am to admit it, I usually choose the newer versions because I have not seen the originals.  And while I indeed haven’t seen this 1957 movie, that is not why I picked the 2007 film this time.

Honestly, I have no idea why, but I don’t watch westerns.  For this reason, I had never seen either version of 3:10 to Yuma nor did I ever plan to.  Despite my mother’s insistence that I would enjoy this film, my attitude about westerns didn’t change and I put off watching this movie until the very last minute.

When I finally did watch, the fact that 3:10 was a western didn’t even seem to matter much anymore, much like Wyatt Earp and Tombstone—two westerns that I’ve actually seen from the beginning to the end AND enjoyed.  And trust me, I’m not kidding when I say the list of cowboy-type movies I’ve watched pretty much ends there.

Back to the question at hand—why did I request the remake?  Two words—Ben Foster.

My review of the 2011 remake of The Mechanic is actually what prompted us to review 3:10 in the first place.  Back in October, I raved about the performance of a relatively unknown actor cast opposite Jason Statham in the action film—Mr. Ben Foster.  A reader and fellow author, Steven Montano, then suggested we cover 3:10 to Yuma.  Not only did he want to see how we’d break down the western classic and its remake, but he also wanted me to watch Ben Foster’s performance in another movie.

And after watching, I’ll say one thing—I really like this guy.  Much like in The Mechanic, Mr. Foster almost steals the show.  His role is small, but his delivery is perfection and his eyes are captivating—he pulls the viewer in.

Based on the Elmore Leonard short story Three-Ten to Yuma, the movie follows the story of Dan Evans, the hero, and Ben Wade, the villain.  Now, if I’ve learned anything about Elmore Leonard’s writing  by watching Justified (the hit television series  based on his work), it’s that he knows how to develop characters—and not just the heroes.  Like his antagonist Boyd Crowder in the FX TV series, I couldn’t keep myself from liking Wade (played by Russell Crowe) AND Charlie (played by Ben Foster).

Clearly, Wade is the villain; he is the antagonist.  But his character has so many layers that he’s hard to despise while watching the 2007 remake.   To quote Alice Evans, played by Gretchen Mol, “He’s not what I expected.”

Wade is a business man who burns barns to collect when not paid back in cash; he’ll “borrow” livestock to set up a blockade to complete a heist, but he returns them to their rightful owner  once they’ve served their purpose;  he’ll steal a man’s horses so he can’t follow him and his crew out of the mountains, but he’ll tie them up down the way so the owner can retain possession; he’s a patient man who loves to sketch God’s precious creations; and he’ll quote the Bible, even when using the said quote to justify his most recent killing—a man in his own crew.

“Proverbs 13:3.  He that keepeth his mouth keepeth his life.  He that opens his lips too wide shall bring on his own destruction.”  ~ Wade to his crew, proving anyone is disposable when they put the rest of the group at risk.

Up until this point in the movie, Wade sits back and watches his men, led by Charlie Prince, do all of his dirty work.  It’s at this moment that the viewers see that Wade means business and he will not hesitate to remove anything or anyone standing in his way.

Everyone seems to fear Wade, but one down on his luck rancher—Dan Evans (played by Christian Bale)—who will do anything to raise enough money to save his family’s home and livestock.

Dan, the hero, is another character who pulls us in immediately…  He’s a war veteran, a husband and father, a man fighting to save everything.

As for the film itself, and like Catie stated in her review, the conflict is obvious.  Dan Evans will do anything to save his ranch and protect his family.  He steps up when no one else will and he vows to place Wade on the 3:10 train to Yuma.  On the flip side, Wade will do everything in his power to avoid the train because he knows upon reaching his destination he will surely hang.

Leading up to the big showdown and expected gunfight at the end, Dan’s son William (played by Logan Lerman) and Wade share a moment that defines the complexity of Wade’s character:

William: “Call ‘em off.”
Wade: “Why should I?”
William: “Because you’re not all bad.”
Wade: “Yes, I am.”
William: “You saved us from those Indians.”
Wade: “I saved myself.”
William: You got us through the tunnels.  You helped us get away.”
Wade: “If I had a gun in them tunnels, I would have used it on you.”
William: “I don’t believe you.”
Wade: “Kid, I wouldn’t last five minutes leading an outfit like that if I wasn’t as rotten as hell.”

But is he?  Is Wade all that rotten?  Well… watch the ending to see.

Now, I haven’t seen the original, so I have nothing to compare the remake to.  However, I do know that Russell Crowe and Christian Bale are absolutely fantastic in this movie.  It’s hard to imagine Tom Cruise playing Wade and Eric Bana playing Dan, but they almost did.  Thank the movie gods that this didn’t happen.  I have a hard time believing 3:10 to Yuma would have been nearly as enjoyable without Crowe’s and Bale’s intense performances.

Catie always lists some sort of fun trivia in her reviews, so I thought I’d throw one out there: from the time the city’s clock strikes three times for three o’clock, and the time the train arrives, exactly ten minutes pass in the movie.  That’s ten minutes of intense gun fighting AND ten minutes where I personally found myself rooting for the hero… and the villain.

I said it once before and I’ll say it again: I don’t watch westerns.  But, I am glad I watched this one.

What do you think?  Have you seen either the original or the remake of 3:10 to Yuma?  If you’ve seen both, which do you prefer and why?  If you haven’t, do you want to?  I’d love to hear from you!