It’s time again for Catie Rhodes and me to break down another cinematic original and its remake.  Sticking with our usual ways, Catie reviews the original and I take on the remake.  This month we tackle the holiday horror film, April Fool’s Day. 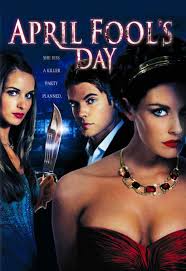 One year after an April Fool’s prank goes horribly wrong, a group of friends realize the joke is on them when they start to die one by one…

For once, I didn’t actually request to cover the remake.  I know;  I know.  No one believes me… but it’s true.  Since I had already seen both films, I let Catie choose which one she wanted to review before turning in any requests.  And with her decision to cover the original, I ran out and found a cheap copy of the remake… considering I couldn’t find it on cable, On Demand, or Amazon streaming.  I had only watched the 2008 film once, and while I sort of remembered it, I couldn’t recall enough of the movie for the sake of this post.  And that, my friends, should have been my first clue as to just how good this version was/is.  Can anyone hear my sarcasm through my writing?

While the young cast in the 1986 film was rather popular at the time, April Fool’s Day (2008) cast primarily unknown actors at the time (at least to the general viewing audience) with only a few familiar faces.  However, today, quite a few of these folks are very recognizable…

It’s not surprising that the others in the film haven’t skyrocketed to success just yet, but that’s not to say we won’t see any of them in successful projects in the future—right?  I’m not trying to hate on any of the actors in this movie, I’m just implying that this job probably didn’t do them any favors.

The 2008 film isn’t so much a remake, just another telling of April Fool’s pranks between friends and foes with the slasher/horror element.  The original is so much more suspenseful than this flick, and the fact that the viewers really can’t connect with or care for any of these characters doesn’t help.  At least not for me.

April Fool’s Day (2008) might just be one of the more recent films that fall into the campy category—and I usually only use this word to describe older films in the horror genre.  Not only that, but Catie mentioned the scary music as one of the clichéd elements in the original… well, the music in the “remake,” and I say that loosely… that’s why it’s in quotes, is almost goofy at certain points in the film.  There aren’t any “grisly, cringeworthy murders” like in the 1986 version, and there are no “cheap scares that make you jump.”  Really, the only horror clichés that exist in both films are the partying teenagers, and in the 2008 flick, I’m not sure they’re technically teens… let’s go with young adults.

I normally love slashers, especially when centered around a particular holiday; and while I have now seen this twice and actually own the DVD, I can’t find much to say about it that’s positive.  Well, other than the eye candy… and the fact that I’m quite certain the role of Blaine Cartier was great on the resume for Josh Henderson when he auditioned for the part of John Ross Ewing.  The Cartiers are “The Kennedys of the Carolinas” and being wealthy, privileged, and entitled doesn’t even begin to describe these kids… just like Mr. Ewing.

So, in closing, I’d like to quote the character of Wilford (the butler): “Oh, my.”

I’m not getting those ninety minutes back.  If you want to watch a movie called April Fool’s Day, go for the original.  Hands down.

What do you think?  Have you seen either the original or the remake of April Fool’s Day?  If you’ve seen both, which do you prefer and why?  If you haven’t, do you want to?  I’d love to hear from you!