The summer shows have started, some of them anyway.  And while we still have a few left to premiere, and despite my second DVR crash since March (I’ve lost over 200 recordings this calendar year due to faulty boxes), I did manage to catch up on the new ABC reality program/murder mystery, Whodunnit? via OnDemand.

Ever want to attend one of those murder mystery dinner parties or theaters?  I have!

Thirteen contestants have gathered to live inside a mansion (Rue Manor).  Their goal?  Solve a “murder” for the grand prize of $250,000.  Each week, one houseguest is selected to “die” a mysterious death by the “killer,” who also happens to be one of the houseguests.  But who is it?

At the time of the murder, the remaining guests become “investigators.”  Led around by the butler, Giles, and two housemaids, they must immediately choose one of three options: to visit the scene of the victim’s last known whereabouts, the scene of the crime, or the morgue (located in the basement of the mansion).  The “investigators” then use their investigative skills to work up a “murder dossier” of sorts.

Let’s talk about the “investigators” for a minute…  talk about clashing personalities!  Most of the contestants should really know what they are doing, being their professions, in one way or another, are crime related (a former homicide detective, a bounty hunter, a few attorneys, an insurance investigator, and two journalists—one of whom is a TV crime reporter).  The rest of the houseguests fall into the “everybody else” category, with an ex-beauty queen, a cardiac nurse, a bar trivia host, an engineer, a flight attendant, and an ex-NFL cheerleader.

This is an eclectic group of people and this fact creates quite a few challenges of its own.  For example, pretty much everyone uses different investigative techniques and skills and has different ways of “dealing” with others.  But the biggest challenge between the members of the game is whether or not they can trust the other participants… do they share what they’ve learned or keep everything a secret?  To quote Melina (the flight attendant), “this group is a hot mess.”

Considering this is reality TV, the actual death scenes aren’t too corny and the stunts and special effects aren’t all that bad.  So far, we’ve seen a death by a musket round fired via a sling shot, covered up by the careful planning of the “killer” to make it look like electrocution at first glance, and a death by fire via static electricity.

As far as the game is concerned, the contestants also receive one clue/riddle per murder.  Once the riddle is solved, a bell sounds and the game is “dead.”  After getting dressed up for a potential last meal, the “investigators” describe in detail what they think happened and those furthest from the truth are eliminated.  One by one, and in front of each other, they learn whether or not their theories earned them a “spared” card or a “scared” card—meaning who’s safe and who’s potentially going to “die” later that night. 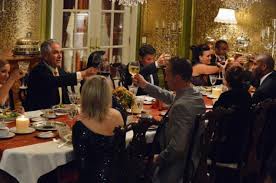 When I previewed this show last month, I commented that this setup reminded me of the older reality show, The Mole, that aired from 2001-2008.  Remember that one?

After watching the first two episodes, I’ve concluded that Whodunnit? is very much like The Mole.  For one, instead of working together to earn money each week, this group of untrusting souls should work together to figure out who “the killer” is to further advance themselves in the game.  Secondly, the way the “investigators” reveal what they think happened is similar, making their pitch privately to a camera.  Even the way the houseguests are informed whether or not they are safe is the same (from what I can remember from The Mole anyway… it’s been awhile since I’ve watched it).  And lastly, just like “The Mole,” “the killer” is doing everything in his or her power to throw the rest of the houseguests off his/her trail by sabotaging the game.

Bottom line?  I’m hooked… earning Whodunnit? the MacTV rating for this mystery writer.  TV’s latest reality program is a total guilty pleasure.  And so far, it has me completely stumped.  The person I thought was “the killer” was “murdered” at the end of the second episode.  Drats!  Back to the drawing board…

Have you watched Whodunnit?  Do you plan to?  I’d love to hear from you!