This one? Or that one?

Do you ask yourself these very questions if and when you have a free hour to watch television?

I realize that most people don’t watch (or DVR in my case) four to ten hours of television a night — so, I am here to help you!

My #1 – CSI: NY.  The addition of Sela Ward this season really helps make up for losing Melina Kanakaredes, and Gary Sinise is always great.  I feel the ensemble cast of NY wins against the other two CSI shows, and New York City is a wonderful supporting cast member.  I also like the NY storylines a bit more than the others CSI shows — the crimes appear to be a bit more believable.  I do hope the remainder of the 2011 season brings more of David James Elliott’s guest appearances as a FBI agent.  Plus, I’d be remiss if I didn’t add that I have a small crush on Carmine Giovinazzo (Danny Messer).

My #2 – CSI: Miami.  I love the bright colors and shots of Miami throughout the episodes; however, Horatio Caine, his sunglasses, and his one-liners drive me nuts!  Honestly, if it wasn’t for Horatio, Miami may rank above NY.  I must admit though, Horatio and his sunglasses have become a staple for the show.  I love Calleigh Duquesne, and I applaud the show’s attempts at covering Emily Procter’s pregnancy since they chose not to write it into the storyline.  I can’t wait for next season when Calleigh has more scenes, and hopefully the show re-explores the Calleigh/Eric Delko relationship.  Major kudos to Miami for bringing back Adam Rodriquez’s character, Delko.  I liked Eddie Cibrian, but it just wasn’t the same. 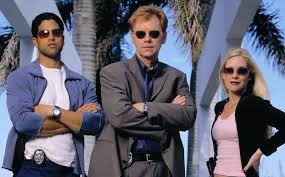 My #3 – the original, CSI: Crime Scene Investigation.  The Vegas edition has been through a lot in its 11 years on the air.  The original cast has dwindled: Grissom is off the screen even though William Peterson is still involved with the production; they killed Gary Dourdan, aka Warrick Brown, and he was probably my favorite.  The show has tried to redeem itself with the addition of Lawrence Fishburne, and that did help.  The show also brought Jorja Fox back after a brief hiatus.  But, unfortunately, the storylines too often reach far beyond the norm making it last on my list — but then again, it’s Vegas, baby!  You may now think I’m stranger than you once thought, but a part of me watches to support my fellow Red Raider: Guns’ Up – George Eads, aka Nick Stokes. 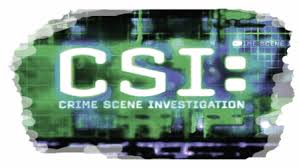 My #1 – Law and Order: Criminal Intent.  NBC dropped CI a few years ago, but the USA network picked it right up.  They’ve waffled a bit with characters: Chris Noth, Jeff Goldblum, Annabella Sciorra, Saffron Burrows, Mary Elizabeth Mastrantonio, and Alicia Witt — all big names, but still not the originals – Vincent D’Onofrio (Goren) and Kathryn Erbe (Eames).  CI returns this May for its final season on USA.  Goren and Eames may be on my top all-time partner list along with Booth & Bones (Bones), Crockett & Tubbs (Miami Vice), and Maddie Hayes & David Addison (Moonlighting).  Goren & Eames’ partnership works, and I’m glad they’re back to close out a solid show. 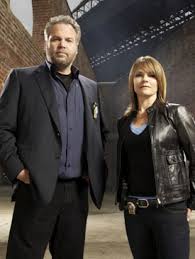 My #2 – Law and Order: SVU.  SVU has another great ensemble cast, but showcases gut-wrenching storylines.  The Special Victims Unit works assault and rape cases led by Olivia Benson (Mariska Hargitay), and her partner, Elliott Stabler (Christopher Meloni).  Benson, the product of her mother’s rape, and Stabler, the father of five children, take the cases personally and sometimes they take actions that we as viewers wish we could see more of on television (in other words, they’re not always by the book).  The main characters are joined by Tutuola (Ice-T), also not by-the-book, and Munch (Richard Belzer), who adds a small comedic touch to the otherwise dark story.  SVU loads the guest stars into each season.  So far in the 2010-2011 season, the show has featured Jeremy Irons, Jennifer Love Hewitt, Marcia Gay Harden, Debra Messing, Rose McGowen, and many more.  Warning – the writers don’t sugar-coat things.  If you don’t like watching bad things happen to children, don’t watch! 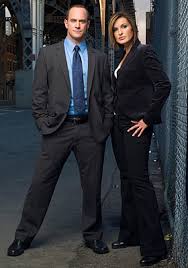 My #3 – Law and Order: LA.  NBC rushed LA to make up for the fact they cancelled the original Law & Order without much warning after 20 years.  I shelved my frustrations, and I looked forward to the new cast led by Skeet Ulrich.  NBC aired a few episodes this fall, and then bam, it was gone.  After more than a 4 month hiatus, LA returned last night with a BANG.  Yea, they really did kill off Skeet Ulrich.  I don’t mean to ruin it for anyone, but it aired last night.  A small redemption: former Law & Order cast member Alana de la Garza (also formerly of CSI: Miami) has joined the LA cast.  Now the show is led by Terrence Howard and Alfred Molina, and I’m quite sure they can hold their own.  I’m not giving up yet, but as it stands now, LA is the low-Law and Order on my totem pole.

Do you battle with This One or That One?  If so, who do you choose?  I’d love to hear from you!