Every December, my guy takes an extended amount of time off and we use his vacation as our annual staycation.  Not only do we catch up on our sleep, but we also catch up on the latest releases we missed during their stint at the theater.  Usually we lean toward the comedies, wanting to relax and laugh the previous year away, but this time we frequented dramas and tension filled actions and mysteries.

Today, I’ve decided to rank these films from our least favorite to the most.  And after writing my reviews of each movie, the post far exceeded my usual word count, so I have split it into two:

Today’s Part One: The Bottom Half

And January 18th’s Part Two: The Top Half (next Friday will be the first installment of the 2013 Original versus Remake series collaboration with Catie Rhodes, thus the skip in weeks…) 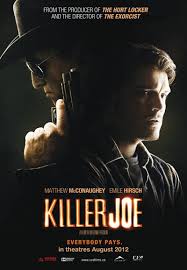 Killer Joe stars my boy Matthew McConaughey as “Killer” Joe Cooper, a detective by day and a hired gun by night.  I had never heard of Killer Joe before flipping through the available movies at Redbox, and it sold me almost immediately.

I wish it hadn’t.

First, I must issue a disclaimer.  If anyone is interested in watching this movie, make sure nudity and borderline pornographic scenes do not offend you before pressing play.  I mean it—the first scene is quite eye-opening… and it doesn’t stop there.

And pornographic?  Yes.  Let me just say there are two Matthew scenes that floored me… floored me as in I can’t believe he filmed them in the first place.  My guy skipped this film and decided to play video games instead.  I tried to get him to watch these two scenes with me after the fact, but he wasn’t interested after I told him about them…

If one can look past the “sexy” aspect of this movie, and I say “sexy” loosely, then we have the story itself.  For me, it didn’t get much better.  Really.  I laughed out loud more than I should have.  Some claim Killer Joe to be a dark comedy… well it is dark and I did laugh, but I never really “got” that it was supposed to be funny.  And I love dark comedies. 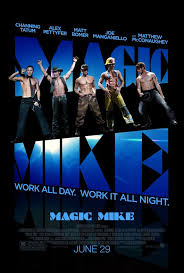 I’m probably going to upset quite a few women having Magic Mike so low on my list… But let’s face it; the story itself is actually pretty weak.  Oh, and the acting isn’t really that much better…

One might question how the acting could be so bad when the film is stocked-full of top-notch actors today… just look at this list: People Magazine’s Sexiest Man Alive, Channing Tatum; the boy who knocked my socks off in I am Number Four, Alex Pettyfer; our favorite True Blood werewolf Alcide, Joe Manganiello; the super suave and sexy Neal Caffrey from TV’s White Collar, Matt Bomer; one of the best looking CSIs on TV to date, Adam Rodriguez; and one of my all-time favorite Southerners, Matthew McConaughey.  Luckily for these guys, the horrible acting isn’t really their fault… it’s more the girls in the movie—the two girls.  To me, it felt like the casting directors locked in all of these studs and then forgot the movie needed a female presence, so they cast one relative up and comer (Olivia Munn) and someone I’ve never heard of to play the major female role (Cody Horn).

Regardless, did the female population go see this film because we expected the plot and acting to completely knock our socks off?  No—we paid money to see the boys and their dance moves!

When thought of from the eye candy and dance perspectives, Magic Mike does not disappoint!  I personally skipped out on Step Up, but I am now convinced Channing Tatum is an amazing dancer.  Not only that, but he’s one heck of a choreographer… at least I believe he helped teach the remaining hotties how to dance sexy-style.

Like most of the other women in the country, I first saw Magic Mike in the theater.  But when my mom came to visit over the holidays, I wanted her to see it too.  There are certain films that my father simply won’t see, and I was afraid this would be one of those movies.  And I was right.  So, despite the fact I wasn’t really a fan the first time I saw it, I watched it again with my mom.

Not surprisingly, she felt the exact same way I did.  Actually, she may have been a bit more critical than I was about the film.  But she did agree with me on one aspect—the guys are beautiful and boy can they move! 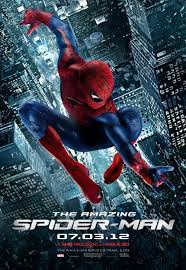 I’m not a comic book buff, but I know who Spider-Man is.  I even saw all of the Sam Raimi films starring Toby Maguire and enjoyed them.  This led me to question the decision to restart the franchise with a new Spider-Man (Andrew Garfield) instead of continuing with the story already in place… there’s no Mary Jane (Kristen Dunst), no Harry Osborn (James Franco), and really no other similarities other than Peter Parker is orphaned and now living with his aunt and uncle.

That said, the reboot does have something I liked—Emma Stone.  I adore this girl.  Every movie I’ve seen her in I’ve enjoyed.  Granted, The Amazing Spider-Man is one of my least favorites on my holiday movie-watching list, but her role brightened the experience for me.

Andrew Garfield isn’t bad as Peter/Spider-Man either; I just wish the series would move forward instead of going backward—absolutely nothing against him.

Now, my guy is a comic book buff, and even he was disappointed with this film.  His biggest complaint?  This movie lacked originality.  He pinpointed a few of the scenes and ideas that were considered ground-breaking and awe-inspiring in the Maguire generation of movies that were simply copied, even if not exactly, and inserted into the reboot.

Me?  I didn’t notice this per se, but I do know the film just didn’t do it for me.

I really battled with my decision to list Killer Joe at #7 and Magic Mike at #6.  Both films were equally as unimpressive… but, considering I actually paid for and watched Magic Mike twice, it has the edge up.  I will probably never watch Killer Joe again.

The Amazing Spider-Man is actually not that bad, I was just disappointed… and my guy… but that doesn’t mean we will skip out on the future films in the franchise.

Have you seen any of these movies?  If so, what did you think?  Have you been disappointed by any recent films?  I’d love to hear from you!

Remember to come back the 18th for the top half of the list when I review:

Can anyone guess the order in which these flicks will fall?