On August 1, 1981, Music Television (also known as MTV) launched with the music video, “Video Killed the Radio Star” by The Buggles, and was immediately a breakthrough success.  MTV changed pop culture forever, and even created what we know as VJs (vee-jay or video jockey) today.

By the 1990s, the network began to drift away from the music videos, and started airing original broadcasts such as Road Rules and The Real World, animations including Beavis and Butthead and Celebrity Deathmatch, and even a few popular game shows like Remote Control and Singled Out – the show that putJenny McCarthy and Carmen Electra on the map.

By 2000, rarely could we flip channels to MTV and actually watch a music video.  Instead, we’d find The Osbournes, and watch Ozzy and Sharon wrangle their children and many small dogs around their house in Los Angeles; or we’d watch Ashton Kutcher play pranks on celebrities on Punk’d; and, sometimes we’d even watch Newlyweds: Nick and Jessica so that we could laugh at just how silly that girl can be.

Since then, MTV has continued to launch more and more reality shows: Laguna Beach, NEXT, My Super Sweet 16, and the craziest of them all, Jersey Shore.  And, who could forget one of the biggest hits of all MTV programming – Jackass?

Where would society be today without Johnny Knoxville, Bam Margera, Steve-O, Ryan (R.I.P.), and Wee-Man?

This summer, MTV gained positive attention with the premier of its supernatural hit Teen Wolf.  Some of us even refer to Teen Wolf as the summer’s The Vampire Diaries – and that’s a huge compliment.

Will MTV be able to do it again with Death Valley, the new half hour horror-comedy premiering later this month? 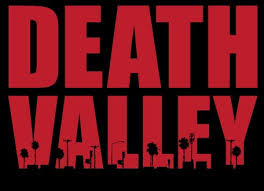 Death Valley follows the Undead Task Force (UTF) as they protect the San Fernando Valley from the recent outbreak of zombies, vampires, and werewolves.   The UTF, a special division within the LAPD, is tasked with the responsibility of containing or destroying as many of the walking dead as possible, while a film crew follows them documenting each encounter.

Viewers will recognize a few familiar faces on the UTF squad including: Captain Frank Dashell (Bryan Callen from The Hangover); the traditional cop, Joe Stubeck (Charlie Sanders from Funny or Die Presents); the wanna-be-actor Billy Pierce (Bryce Johnson from Pretty Little Liars); the rookie Kirsten Landry (Caity Lotz from Mad Men); the sharp-shooter, Carla Rinaldi (Tania Raymonde from Lost); and, the one who loves to fight, John-John Johnson (Texas Battle from The Bold and the Beautiful).

The trailer looks hilarious and leads us to believe the show will have plenty of gore.  What more could we ask for when watching zombies, vampires, and werewolves?

Zombies, Vampires, and Werewolves – Oh, My!

Will you watch Death Valley?  Or do you prefer that MTV stop trying to compete with the regular network broadcasting channels and go back to playing more music videos?  What’s the first music video you remember watching on MTV? What’s your favorite program of all time on MTV? Do you even watch MTV anymore? I’d love to hear from you!