Happy 2012, everyone!  This week, Amber West and I return to the world of fairy tales, where we re-review Grimm and Once Upon a Time on Why It’s Worth a Watch Wednesday.

We first reviewed NBC’s new drama based on the Grimm’s Fairy Tales shortly after it premiered.  The series follows Detective Nick Burkhardt (David Giuntoli) as he balances his life solving murders and learning that he comes from a long line of criminal profilers (Grimms) responsible for protecting the people of the world against the supernatural. 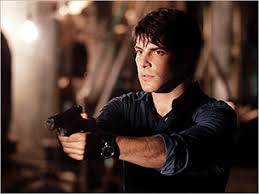 To Recap: The Hook and Fairy Tale Number One – Little Red Riding Hood.

The pilot episode might still be my favorite.  The attention to detail and fantastic one-liners hooked me immediately, but not enough to earn anything above the SSTV rating.  I mean, seriously – the program had just barely aired one episode, but the interest was there…

The series began as a sorority girl departs from her house wearing a bright red hoodie and listening to the Eurythmics “Sweet Dreams” as she sets out for her morning jog through the woods.  While on her run, the girl spots an odd figurine positioned on a rock.  She stops to investigate when she is suddenly tackled by something with lightening fast speed, and the viewers can only assume she’s going to die.

Nick and his partner, Hank Griffin (Russell Hornsby), drive out to the scene of the crime where they discover a jogger has been ripped apart in the woods.  The detectives assume an animal is responsible for the attack, although they can’t seem to locate any animal tracks – only boot tracks. 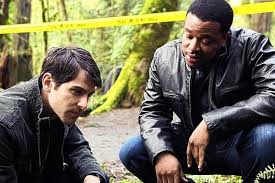 Later that night, Nick returns home to discover his Aunt Marie (Kate Burton) has stopped by on a surprise visit.  After a cryptic, “we need to talk,” Nick and his aunt go for a walk and she begins to tell him that his family has a secret.  His parents didn’t die in an accident; they were murdered.  Why is she telling him this now?  She is dying, and the Grimm powers will pass to him in just a matter of days if they haven’t already.

Before she can tell him the complete story, Nick and his aunt are attacked by a Reaper of the Grimms.  Nick can’t believe his eyes and he opens fire on the monster and shoots him dead, but not before the attack renders his aunt unconscious.

Reeling from the day’s events, Nick walks into his aunt’s travel-trailer where he finds an arsenal of bizarre weapons and an ancient family book revealing his destiny.   All of this helps explain the event earlier in the day when he noticed a beautiful blonde walking down the street suddenly transform into nasty looking creature. 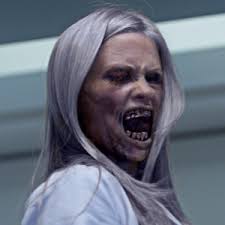 As most of us would with life-altering information such as this, Nick decides to keep his secret from his girlfriend (Bitsie Tulloch) and his partner.  For now, anyway.

The fairy tale continues the next day when Nick and his partner are called to another crime scene.  This time, a younger girl has been kidnapped with the initials R.H.  Coincidence?

This is where Nick tracks down Eddie Monroe (Silas Weir Mitchell), a reformed Big Bad Wolf.   Monroe can see Nick as a Grimm immediately, but he reluctantly agrees to help Nick understand the mythology.   Monroe also agrees to help track down the Big Bad responsible for the little girl’s disappearance.  He drives Nick out to the woods, sticking his head out the window along the way sniffing out the Big Bad’s scent.  Afraid of what might happen if he gets too close, Monroe retreats as soon as they locate the cabin where his sense of smell has indicated the Big Bad and little R.H. are located.  Nick calls Hank out to the woods, but explains he didn’t call for any additional backup because he “already cried wolf once.” 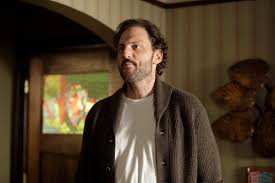 Of course, Hank doesn’t understand how Nick tracked this man down, but he believes his partner when he overhears the suspect humming the exact same song that had been playing in the jogger’s ear buds, “Sweet Dreams.”  The take down ensues, little R.H. is rescued, and Grimm ends with the Marilyn Manson version of “Sweet Dreams” — I’ve got to know what’s inside you.

Let’s be honest – the song is what actually hooked me.  Not only is it a favorite (either rendition), but the chosen lyrics forshadowed what the series had in story of us.  Like we mentioned earlier, great attention to detail.

Now further into the season, Grimm has aired more episodes and tackled fairy tales such as Goldilocks and the Three Bears, The Pied Piper, Rapunzel, The Queen Bee, and the Three Little Pigs.  The special effects and storylines are enticing; the use of Monroe in each episode to help Nick solve the case at hand is fun, and it is a bit heartwarming to see the two work together and develop a friendship between creature and Grimm; and the actual police procedural aspect of the story ranks up there with the other crime dramas on television today.

The first creature that Nick saw transform on the street has a bit of a recurring role, and has since been identified as a hexinbeast (the blonde monster from the pilot episode, played by Claire Coffee).  Nick and Hank were assigned to protect her in “The Queen Bee” episode, despite the fact that she attempted to kill his aunt while in the hospital (of course Hank has no idea about Nick’s past encounters with her).

As viewers, we know this hexinbeast is working for Nick’s police captain (Captain Renard played by Sasha Roiz), but Nick has no idea his boss is a bad guy, a Reaper.

Which poses the question, why not?  Nick can see the creatures transform in front of him, so why can’t he see that his boss is one of them?  Also, we know that the creatures know immediately just by looking at him that Nick is a Grimm, so what is it that they see exactly?  Does his face transform as well?

Obviously, I’d like for the series to answer some of these questions; but in the meantime, since sitting on the hot plate after the pilot, the simmering water is now boiling and Grimm earns a MacTV rating.  The water is clearly hot enough for us to drop in the pasta in order to enjoy some MacNCheese, and we’re anxiously awaiting its return in a few weeks.

What do you think? Do you watch Grimm?  Which of the episodes has been your favorite and why?  What do you think about Monroe?  How long before Nick’s captain is exposed?  I’d love to hear from you!

Now click over to Amber’s blog and check out her second review of ABC’s new hit, Once Upon a Time.

Come back next week when Amber and I review a few sci-fi hits – SyFy’s Being Human and an update to Fox’s Terra Nova (it too was left simmering on the stove…).