Today, I’m jumping in with a show that could either a) fall in line with all the other police procedurals on TV, or  b) stand out as the next Dick Wolf success—Chicago P.D..

Created by Dick Wolf (Law & Order) and a spinoff series of Chicago Fire, Chicago P.D. will serve as yet another typical police procedural on television.  Or will it?

My main question is this—will Sergeant Hank Voight (Jason Beghe) be a good guy or a bad guy?  While I did not watch the entire first season of Chicago Fire, I did watch enough to know that he was not a “good” cop.  The character did not hesitate to cross legal or ethical lines.  And if he’s anything like that on the new show, what in the world is his staff going to be like? 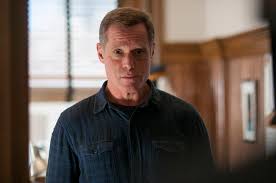 And speaking of Jason Beghe, I’ve had a crush on him since I was a little girl when he starred as the quarterback, Tom Yinessa, on HBO’s 1st & Ten.  Yes; my parents let me watch with them—it was about football, after all!  And most recently, I’ve enjoyed his recurring character, Richard Bates, on Showtime’s Californication where he plays an alcoholic/sometimes gay/sometimes straight man.  His performances are fantastic.  Needless to say, I gave Chicago P.D. a try just for him.

But let’s talk about Voight right now… like I mentioned earlier, Voight was not a “good” cop on Chicago Fire.  Actually, he went to jail.  However, in this new series, his character has negotiated some deal to get out of prison and land himself the supervisory position for the Intelligence Unit of the Chicago Police Department.  We later learn this deal is for him to secretly report back to Internal Affairs… but will he?  Will he be 100% honest with them?  Probably not…

So is he good or bad?

Well, Voight instructs his staff to keep everything in-house… they tell him the truth, so he can lie for them.  This isn’t so strange.  Anyone who has played sports has heard the saying “what happens in the locker room, stays in the locker room.”  Same concept.

The Intelligence Unit is family, and to Voight, nothing is more important than family.  Yet, sadly, his sordid past actually gets one of his officers killed in the first episode (in a round-about-way).  Sorry for the spoiler.

Ultimately, Voight just operates under the mantra—and expects his team to as well—whatever it takes.

Does this make him bad?  Naaa.  I kinda like him and will continue to watch because of him.  I want to see how many professional and ethical lines he and his team will cross, while maintaining characters that I like and am actually rooting for.  There seems to be the “right way” and the “Voight way” of doing things.  Sometimes “Voight’s way” is the only way to get things done.  I get that real cops shouldn’t act this way, but this is TV and I like it.

But enough about just Voight…

Chicago P.D. bounces back and forth between his unit and the officers who patrol the streets of Chicago.  As a Law & Order fan, I can definitely tell this series is a Dick Wolf creation from the cinematography and style.   And being a Chicago Fire spinoff, many of the characters have done and will do a crossover stint at one time or another (for those who love and need more of Taylor Kinney and Jesse Spencer).   If I understand correctly, the series will actually do a full-blown crossover episode event with Chicago Fire and Law & Order: SVU.  Guess I’ll need to watch Chicago Fire that week.

While I will and already have watched more of Chicago P.D. than I have Chicago Fire, I can’t award the series with anything beyond a JFTV rating.  I like it; I do.  But I don’t mind letting the episodes pile up on the DVR to watch when I have time.  It’s just like when I keep a bag of those greasy potato chips in the pantry, but only reach for them when I need a fix.  After all, it is just another police procedural on TV today… just with a different kind of twist.

What do you think?  Do you watch Chicago P.D.?  I’d love to hear from you!