This week Amber West and I get back to business and begin the 2012 Television-in-Review schedule on Why It’s Worth a Watch Wednesday, as she updates us on a few of TV’s comedic veterans and I introduce two comedic freshmen.

I’ve always loved to laugh; even as a child, I’d giggle every time I would recite the classic “Knock, Knock” jokes.  Heck, what am I saying?  We’re all friends here; these innocent rhymes still bring a smile to my face today.

As an adult, I look to laughter as my choice in television and movie viewing as much as possible; after all, laughing keeps us young, right?  The type of comedy doesn’t matter to me – I can take a joke whether it is clean, dirty, politically incorrect, and even those that I never feel the need to repeat ever again.

Because of this joy of laughter, I love to watch comedians and one of my favorite late night talk shows is E!’s Chelsea Lately hosted by Chelsea Handler.  I don’t necessarily watch for the guest interviews, but more for the round table of funny that makes up the first twenty minutes of her program.  This is where I met Whitney Cummings for the first time, and later enjoyed her jokes on Comedy Central’s Roasts of many celebrities.

So when I discovered that both Chelsea and Whitney announced new sitcoms on NBC this year, our house tuned in.

Developed, written, and starring comedian Whitney Cummings, Whitney follows the fictionalized story of her life experiences, challenges in relationships we can all relate to – like cohabitation, friendships, secrets, and boundaries.  Whitney lives with her long-term boyfriend, Alex (Chris D’Elia, Glory Daze), and the non-traditional couple sees no reason to get married, but remains happily ever after nonetheless.

The duo is surrounded by their friends: Lily (Zoe Lister-Jones, Breaking Upwards), who believes in happily ever after, Roxanne (Rhea Seehorn, Franklin & Bash), a relationship cynic, Neal (Maulik Pancholy, 30 Rock) who appears to be in a perfect relationship with Lily, and Mark (Dan O’Brien, multiple television appearances including How I Met Your Mother), the self-proclaimed ultimate bachelor.

Each week, my guy and I both laugh throughout the thirty minute series.  Whitney is perfect viewing for couples to watch together.  One of our favorite episodes aired recently when Whitney walks in on Alex’s “alone” time (trying to keep the blog clean here…).

Needless to say, Alex was and is completely mortified, and Whitney begins knocking on her own apartment door to announce when she arrives home each time after the incident.  The episode continues as Whitney confesses the day’s events to her friends, further embarrassing Alex.

Which brings us to the relatable part: what’s safe to share with outsiders, even those we love the most, when working through moments that take place between lovers and partners? Another great episode aired just a few weeks prior when Whitney attempts to prove that Alex speaks to her in a condescending tone, a tone that he denies refutably.  When his brother shows up unannounced, and the two siblings bicker back and forth – in that same condescending tone – Whitney decides to plant one of Mark’s surveillance cameras (he’s a police officer) in the apartment.

As if Whitney’s attempt to capture “the tone” isn’t funny enough, the fact that all four of the couple’s friends gather upstairs in Mark’s apartment to spy on the couple while eating popcorn and snacks, only adds to the greatness.

This sitcom might perhaps evoke more giggles in our house than our previous favorite (How I Met Your Mother), courtesy of the relatability and laugh factor.  Therefore, Whitney earns the MacTV rating – this series is a complete guilty pleasure and leaves us wanting more, men and women alike.

Okay, so if my adoration began for Whitney on Chelsea Lately, Chelsea’s new sitcom should definitely be worth a watch – right? Based on her best seller, Are You there, Vodka? It’s Me, Chelsea, Are You There, Chelsea? does not star Chelsea Handler as Chelsea.  Confused?  Instead, it stars Laura Prepon (That ‘70s Show) as Chelsea, while Chelsea herself plays her sister Sloane. The series takes place in New Jersey, where Chelsea (Prepon) was recently arrested for being under the influence (more than likely a Belvedere influence).  She moves into an apartment within walking distance of her job (a bar, perfect for a girl who loves to drink vodka) with her best friend (Olivia, played by Ali Wong) and new roommate (DeeDee, played by Lauren Lapkus).

Chelsea and her sister share a typical relationship – they love each other but are nothing alike: Sloane bails Chelsea out of jail in the pilot; Chelsea stands by Sloane’s side as she delivers her first-born; Chelsea sleeps with Sloane’s ex-boyfriend, despite her sister’s plea to not go on a date with him; etc. etc. etc.

Which brings us to the sex factor – Chelsea Handler has always been very open about her past relationships, thus the three best sellers, and the sitcom is inspired by a lot of these stories: like when Chelsea and her boss’ sexual encounter fails because neither can succumb to being on bottom (Rick, played by Jake McDorman from Greek); or when Chelsea meets a redhead and she can’t help but wonder if the “carpet matches the drapes”; or when she is embarrassed by the fact that her sister’s ex-boyfriend actually prefers Sloane in bed over her, and she’s determined to rock his world.

Lots and lots of sex.  Oh, and there is a little person too (Todd, played by Mark Povinelli).  Anyone who is familiar with Chelsea Handler knows she loves her “nuggets” – and I personally can’t wait for Chuy Bravo (from Chelsea Lately)  to make an appearance on the show.  Everyone loves Chuy.

Despite my addiction to all things Chelsea (a special shout-out to my guy for taking me to see her stand up this summer), it’s still too early to award Are You There, Chelsea? with anything other than an SSTV rating.  The water is warming up, but it’s just not there yet.

For the fans of the Chelsea Lately Round Table, the guest stars on both Whitney and Are You There, Chelsea? are a plenty, including Loni Love, Jo Koy, Natasha Leggero, and Lisa Lampanelli.  I personally can’t wait for my favorites (Josh Wolf and Sarah Colonna); I just know they’ll have to see a guest spot soon!

What do you think? Do you watch Whitney or Are You There, Chelsea?  What do you like to see in your comedy – clean jokes, dirty jokes, politically incorrect jokes, etc?  Which of the sitcoms currently on TV do you think are GTV worthy?  I’d love to hear from you!

Now click over to Amber’s blog and check out her thoughts regarding the hit comedies Modern Family and The Big Bang Theory, two popular programs requested by our fantastic WatchWed viewers! 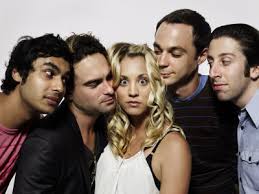 Come back next week when Amber and I review a couple of YA (Young Adult) inspired television series: Glee and The Lying Game.