Which show can be described as a police procedural, detective drama, quirky comedy, and an ‘80s and ’90s throwback? 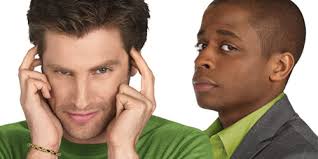 Shawn Spencer (James Roday, Miss Match) was an ornery young boy raised by his single cop dad (Henry Spencer played by Corbin Bernsen, L.A. Law).  Okay, Shawn is still a bit ornery today.  From a very early age, Shawn’s dad taught him to pay close attention to details; and, it’s this astute ability that has allowed Shawn to trick everyone around him into believing he is psychic.

Everyone, that is, except for his father and his best friend, partner, and pharmaceutical salesman Burton ‘Gus’ Guster (Dule Hill, The West Wing).

Each episode begins with a flashback to the ‘80s when Shawn and Gus were young boys.  Often times, this childhood scene depicts an observational lesson from Henry, or a direct memory from Shawn and Gus’ past (like remembering their old classmate, played by Freddie Prinze, Jr.) that will relate directly to the current week’s episode.

Most of Psych’s fun spawns from the banter between Shawn and Gus, Lassie’s constant frustration and exasperation with the two Psych consultants, and the familiar (Shawn and Henry) and romantic (Shawn and Jules) relationships shared between characters.

Fan of the ‘80s? ‘90s? Look no further!  Psych not only casts familiar faces from the decades, but also includes puns on particular storylines.

One of the best episodes to date was the Twin Peaks tribute in season five, “Dual Spires”.  James Roday outdid himself writing the episode: he perfected the oddities of the characters from Lynch’s bizarre murder mystery; he mimicked the eerie music and peculiar dancing to a “T”; and, he incorporated a few of the Twin Peaks iconic elements such as the dead girl’s body wrapped in plastic found by the water, the diner, the log lady, the caged bird, and the pie.

Psych even changed the opening credits to honor Twin Peaks.  This wasn’t the first time the program made subtle changes to the music to reflect the current episode’s theme (just a little fun-Psych-“I Know You Know”-fact).

Rumor has it that this season will also include an Indiana Jones themed episode.  No doubt this will be fabulous!

Do you watch Psych?  Shawn or Gus?  Lassie or Henry?  Who is your favorite guest star to date?  Do you look for the pineapple in each episode?  I’d love to hear from you!

30 Replies to “Tele-Tuesday: Astute or Psychic?”