It’s hard to believe that it has been twenty-five years since we first met John McClane (played by Bruce Willis), a character plagued by bad guys and bad situations on his time off… when all he wants is to spend time with members of his estranged family.  More than once he has saved the day with minimal resources of his own, set off BIG explosions, and entertained moviegoers with his coined catchphrase. 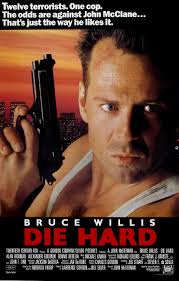 Rarely does a Christmas season roll around that I don’t feel like watching Die Hard.  Watching Willis run around barefoot, sporting only a white tank top and slacks, as he single-handedly removes each and every one of the bad guys while keeping his sense of humor, pulls me in every single time.  And somehow the film hasn’t aged in the almost three decades since its premiere; granted there are a few giveaways that the movie was filmed in the ‘80s, like the big hair and shoulder pads, but for the most part it has weathered the test of time.  Well, except for Bruce Willis’ hair.

Die Hard saw such huge box office numbers that a franchise was born. 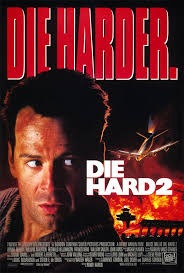 After saving his wife and her coworkers at Nakatomi Plaza from German terrorists (led by Hans Gruber, played by Alan Rickman), John McClane attempts another winter rendezvous with his wife (played by Bonnie Bedelia).  But while at the Washington Dulles airport waiting for her arrival, the NYPD detective once again happens upon a group of bad guys with sinister plans.  As luck would have it, McClane intercepts a group of mercenaries (led by Colonel Stuart, played by William Sadler) attempting to rescue a drug lord from U.S. custody.  Not only does he take it upon himself to prevent this from happening, but in doing so he must also save everyone aboard the aircrafts hovering above the airport in a hold pattern… his wife included.  Clearly McClane isn’t an expert; he’s not an air traffic controller; yet he saves the day (or night in this case) once again because he is fearless. 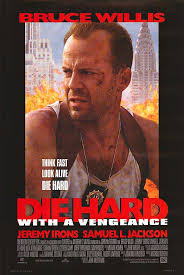 The next time we see McClane, he’s down on his luck and back in New York.  Obviously rescuing his wife twice wasn’t enough to save his marriage, so with nothing to lose, he joins forces with an unsuspecting Harlem man (Zeus Carver, played by Samuel L. Jackson) to save New York City and the financial district from another group of German terrorists.  Only this time his cooperation was requested by the bad guys, led by Simon Peter Gruber (played by Jeremy Irons).  Working feverishly to solve numerous riddles along the way, John finally understands why he was specifically targeted—he killed the head terrorist’s brother (Hans, from the first movie).

Here’s a fun trivia fact: I’ve seen Die Hard with a Vengeance countless times, just like all of the Die Hard movies.  But it wasn’t until recently that I thought I recognized one of the boys playing Samuel L. Jackson’s nephew.  So I grabbed my phone and did a quick internet search.  I was right!  The boy couldn’t have been more than thirteen or fourteen at the time, but I totally called it… do you know who it was?  Aldis Hodge (Hardison from Leverage)!! 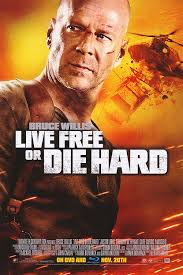 Years passed and moviegoers were given the gift of a fourth John McClane movie with Live Free or Die Hard.  After a cyber-terrorist attack on Washington D.C. (led by Thomas Gabriel, played by Timothy Olyphant), McClane is sent after a top hacker in New York (played by Justin Long) and asked to escort him to the U.S. Capital.  One thing leads to another and it’s McClane versus Gabriel.  Adding fuel to the already explosive fire, Gabriel kidnaps McClane’s daughter (Lucy, played by Mary Elizabeth Winstead).   Not only is he tasked with protecting the hacker and the entire United States from cyber warfare, now it’s personal—and we all know that McClane works best when it’s personal.

Now here we are in 2013, twenty-five years later.  John McClane has saved the cities of Los Angeles, Washington D.C., and New York, as well as his wife (twice) and his daughter (once) from terrorists of one kind or another… so isn’t it about time he helps save his son?  Yes, it is! 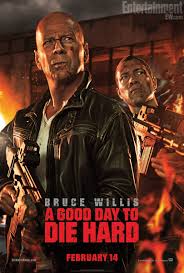 Even though I celebrate an entire month for my birthday, I surprisingly don’t make many requests of my guy.  I make requests… don’t get me wrong… just not that many.  Anyway, one of my requests this year was to see A Good Day to Die Hard in the theaters.  Because of the previous movies in the franchise, I knew this fifth installment would be loaded with action and BIG explosions.  Movies like this require a trip to the big screen.

And like its predecessors, A Good Day to Die Hard did not disappoint in those areas.  At this point in the series, backstory isn’t necessary, allowing the film to move immediately into the action.  All of the classic Die Hard elements are there…  McClane thinks he’s going to Russia to see his son and all hell breaks loose.  There’s humor, BIG explosions, and McClane’s coined catchphrase—“Yippee Ki Yay…”  (you can fill in the rest).  Perhaps it’s not the best flick of the five, but it worked for me.  Not to mention little John Junior (Jai Courtney), or Jack as he likes to be called, is a fine piece of eye candy.

Will I watch the latest Die Hard countless times in the future, just like I have the other four?  Probably.  Is it the best movie ever?  No.  It’s not even the best in the franchise.  But it was fun, somewhat believable as it pertains to McClane’s aging, and it maintains all the things we’ve grown to love about the franchise and character over the years.

Oh, and guess what?  Aldis Hodge has a small appearance in A Good Day to Die Hard too!  This time he plays a government or military operative working to get Jack out of Russia with his asset (it’s really not clear exactly what his job is since he’s barely on screen).  He’s on screen probably less than he was in Die Hard With a Vengeance, but still—he’s there!

Have you seen A Good Day to Die Hard?  What did you think?  Which of the Die Hard films in the franchise is your favorite and why?  I’d love to hear from you.

8 Replies to “Die Hard Again, But Not Dead Yet”