Most vampire movies today want the audience to fall in love with the vampire.  Take the Twilight series for example – none of the Cullens actually feed on humans (not that we see, anyway).  No, the bad vampires (like Victoria) are the evil vamps killing innocents; and the good vampires, like the Cullen family, fight these bad seeds to protect Bella and the other humans.

That’s not to say that the viewers don’t secretly love Fright Night’s vampire lead.  Jerry Dandridge (Chris Sarandon) possesses all the qualities we love in vampires; he’s sexy, seductive, brooding, and he’s not afraid to sink his teeth into a nightly feed. 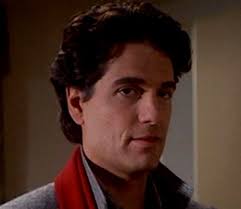 But, Jerry is not the character that the audience is supposed to cheer on during the big showdown at the end of the movie. 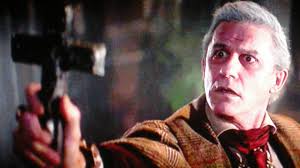 Being a horror fan, Charley immediately questions whether or not a vampire has just moved in next door and he begins investigating.  He reaches out to a television vampire hunter, Peter Vincent (Roddy McDowall) for ways to prove, or disprove, that his new neighbor is indeed a blood-sucker.

Watching women disappear after joining the mysterious man next door, Charley decides to sneak over and put some of Peter’s ideas to the test.  His suspicions are confirmed when he notices Jerry’s image does not reflect in a mirror.  But, unfortunately for the teenager, Jerry learns that his young neighbor has been sneaking around when Charley leaves behind a piece of his mirror.

Jerry stalks Charley, terrorizes him, and makes his life a living hell.  He lures those closest to Charley by turning them and compelling them to do as he wishes.

Charley’s only hope is to trust Peter.  Armed with holy water, crosses, and wooden stakes, Charley and Peter enter the vampire’s house with one goal – kill.

Fright Night is not a feel-good vampire movie.  It’s mysterious, dark, and at times spooky.  Even the music was eerie, particularly the instrumental “Come to Me” by Brad Fiedel.

The movie won awards, spawned a novelization, a sequel, a comic book series, and a computer game.

What has this child of the ‘80s so excited about Fright Night today? 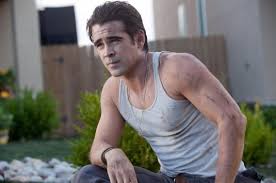 DreamWorks (Steven Spielberg) has remade the classic film, and cast Colin Farrell as Jerry.  Colin Farrell!  Who doesn’t think this is the best casting for the sexy, dark role of Jerry?

Are you a fan of the 1985 classic? Do you plan to see the 2011 remake?  What do you think about the casting of Colin Farrell to play Jerry?  What’s your favorite vampire movie of all time? How much does the music play a part for you? Do you like the traditional role of cinematic vampires or the newer heroic roles? I’d love to hear from you!