Fall Television is officially here!  To celebrate, Amber West and I tuned in and watched two brand new CBS pilots this week for our Why It’s Worth a Watch Wednesday reviews—Elementary and Vegas.

I used to like a show about Vegas a LOT—remember NBC’s Las Vegas, starring James Caan, Josh Duhamel, James Lesure, Molly Simms, and Vanessa Marcil?  Heck, even Tom Selleck starred for a few seasons after Caan left.  Now that was a good show…

But that’s not this Vegas. 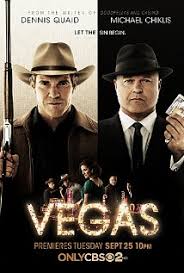 Inspired by a true story, Vegas follows a sheriff and rancher as he battles a Chicago mob boss looking to take over the desert town in the 1960s.  As their personalities and lifestyles clash, these two men with completely different ideals battle head-to-head.  Who will win?  After all, Vegas is all about winning and losing…

Sheriff Lamb (played by Dennis Quaid, no introduction necessary) simply wants to tend to his ranch, but sometimes local hooligans getting into trouble stand in his way.  Alongside his brother (Deputy Jack Lamb, played by Jason O’Mara from Terra Nova and Life on Mars) and his son (Dixon Lamb, played by Taylor Handley from Hidden Palms) he manages both businesses—cattle and crime.

Quaid, O’Mara, and Handley… those are some good-looking guys, but that’s not the point of today’s post…

As the Lambs prepare their cattle for auction, the herd is interrupted and scatters when an airplane flies low over the ranch.  The airliner is on its descent into the Nevada desert, carrying none other than Chicago mobster Vincent Savino (played by Michael Chiklis from The Shield and No Ordinary Family).  The gangster watches Sheriff Lamb as he takes on three men at the airport for ruining his morning round-up, and Savino immediately recognizes he might have an admirable foe in Lamb.  But, as a tough guy from the mob, he’s not concerned and goes about his business—running a casino floor and “taking care” of anyone threatening his plans.

The series also stars: Carrie-Anne Moss (the Matrix movies) as Assistant District Attorney Katherine O’Connell, a woman who shares a history with Lamb and who might potentially pose as a future love interest as well; and Michael O’Neill (The West Wing) as Mayor Ted Bennett, a friend to Lamb but also to the idea of what the “new” Vegas might bring into the town.

If the pilot episode and the previews for tonight’s Vegas are any indicator, viewers will experience not only the building tension and rivalry between Lamb and Savino each week, but also a nightly crime (more than likely centered around a new murder if I had to guess)—I like that.   The setting of the new show is also pretty fantastic; the crew actually created a fictional Freemont Street at the studios in California.  The recreation is amazing, seeing the “old school” casinos like the Golden Nugget in its prime.

One thing that does concern me is the fact that Vegas is technically a period piece, taking place in 1960, and these types of shows don’t usually do very well in the ratings (just look at last year’s Pan Am and The Playboy Club).  While Vegas, Pan Am, and The Playboy Club were all inspired by actual events, this one might be different and survive a little bit longer.  After all, it’s Las Vegas and Sin City is a one-of-a-kind.  Take for instance the high-speed chase scene from the pilot, where a man on horseback chases down a man on a Harley in downtown Las Vegas.  Never thought you’d see that, now did you?  I didn’t.

Of course, it’s too early to award Vegas with anything other than the SSTV rating.  Despite the eye candy of the Lamb family, I need to see more to determine whether or not this drama will be worthy of permanent spot on my DVR.  I’m usually not big on Western-style TV with ranches and horseback riding (yes, I know I’m Texan…), but I do love mafia related stories.  The idea of watching how Las Vegas transformed into what it is today, even though it’s mostly procedural fiction, keeps me interested and I’m not giving up yet.

Did you watch Vegas?  How would you rate it?  If not, are you interested?   I’d love to hear from you!

Come back next week when Amber and I take on two of the new 2012 ABC dramas—Last Resort and 666 Park Avenue.