I’ve asked it before, and I’ll ask it again…  what says Friday night during the fall months better than high school football?

The sun sets; the temperatures cool; and the sounds of marching bands, spectator’s cheers, and the crackling of shoulder pads crashing into one another echo throughout the neighborhoods.  Ah, the memories…

In honor of Football Sweetheart‘s recent release and football season everywhere, grab the old letter jacket, microwave some popcorn, grill a few hot dogs, crack open a coke, and curl up on the sofa for a great movie that reminds us all of the good ol’ Friday nights in fall.

By now, everyone has heard of Friday Night Lights – whether it be the book by H.G. Bissinger published in 1990, the motion picture produced by Brian Grazer in 2004, or the television series starring Kyle Chandler and Connie Britton that aired from 2006 until 2011.  Some even know the “real” Friday night lights—high school football in West Texas.

For the purpose of this post, we’re going to focus on the film.  Friday Night Lights is a perfect Friday night flick for fall. 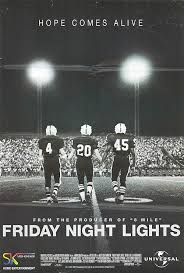 The who – the Permian High School football players

The dream – to win the state championship

The obstacles – a coach that pushes his players too far, parents living vicariously through their teens’ lives, and societal pressure

Coach Gaines is immediately under fire in the media and around town; a head football coach’s job is never safe in West Texas without wins.  And when a star player goes down, people panic.

As if the pressure isn’t already mounting for the kids, Billingsley is also faced with managing his father’s (country music star, Tim McGraw) drinking and outbursts.  Like many other former football stars, his father continues to live in the past and is humiliated that his son is not performing up to his standards.

The season ends with a three-way tie in the district between Permian, their arch-rival Midland Lee Rebels, and Abilene Cooper.  With a flip of a coin, Permian and Lee move on (yes, they really flipped coins in the ’80s to break a three-way tie in conference when determining playoff spots).   Permian rolls through the playoffs and meets Dallas Carter in the state championship.

Watch the movie to find out what happens next….

Have you seen Friday Night Lights?  Have you read the book?  Did you enjoy the television series?  I’d love to hear from you!

If you liked Friday Night Lights, check out my YA Mystery novel, Football Sweetheart… now available on Kindle and Nook!  Being a part of the Midland Lee Football Program can be murder…

And for those die-hard FNL fans, rumor has it that another Friday Night Lights movie is in the works… either that, or Connie Britton is one heck of a jokester!

On a personal note, I was born and raised in Midland, Texas and I’m a proud Midland Lee Rebel.  My father graduated from the first ever senior class at Midland Lee, as did my brother before me in the ’80s, and now my oldest nephew is a sophomore.  My mother retired last year, but taught at Midland Lee for a long time (no years, I promise…you wouldn’t believe me if I told you), but not before graduating from Odessa Permian and participating on the Mojo Pep Squad.  But if you asked her today, she’s 100% a Rebel!

Friday Night Lights, while fictional, does not stray far from the truth, and I highly recommend it to anyone attempting to understand the severity of high school football in West Texas.  I was a student trainer in high school, and I remember a man who traveled in his trailer to watch the Midland Lee versus the Odessa Permian football game because he read Bissinger’s Friday Night Lights: A Town, a Team, and a Dream.  I grew up watching Lee play, lived the annual showdown with Permian, and was shocked that someone from thousands of miles away would drive just to watch high school kids play football.  To me, it was just another Friday night game…