The summer shows have started.  And what says summer better than summer camp?

Most of us have attended summer camp in one form or another during some point in our lives.  Maybe it wasn’t a summer long excursion away from mom and dad; maybe it was just a day camp without sleepovers; but when we were kids, many of us had the pleasure of experiencing summer camp.

For me, it was a small ranch outside Alpine, Marfa, and Fort Davis, Texas called Prude Ranch.  I only attended twice, but both times I spent multiple nights away from home.  I experienced sleeping in the creaky and HOT cabins (even then I was a big fan of air-conditioning); eating Sloppy Joes in the mess hall, while singing camp songs; watching the girls in my bunk apply calamine lotion to all their bug bites; walking along the narrowly made path to the restroom area (Jason Voorhees, anyone?  Yeah, I knew who he was back then and camp life totally creeped me out); riding horses; climbing mountains; and the fun group get-togethers and socials with the rest of the campers before we all packed up and went home.  That was for Girl Scout camp.

I also attended once in high school for a Student Athletic Training Camp—same place, Prude Ranch.  While we slept in a much better cabin as teenagers, most of the days were spent with us learning new taping techniques and sports medicine tricks and treatments, instead of fun outdoor activities.  We still consumed the traditional summer camp food and got to ride horses, but that was about it as far as camp life was concerned.  Still, I wouldn’t take it back for anything.

But enough about me, let’s talk about TV… this is Tele-Tuesday after all. 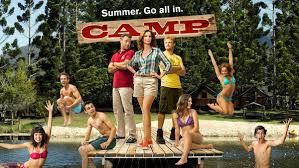 First, we have NBC’s Camp, a one hour dramedy (drama plus comedy for those who aren’t familiar with the slang term) about a woman (MacKenzie Granger, played by Rachel Griffiths from Six Feet Under and Brothers & Sisters) who is running her family summer camp for the first time since her divorce.  Not only is she dealing with the struggles of her new life as a single mom, but she’s also fielding constant and tempting buy-out offers from an upscale resort across the lake… a resort owned and operated by one irresistible man (the romantic tension quickly turns into “hate sex”).  Like mothers do, she’s worried most about her teenage son and how he is handling this familial change; and things only get worse when her ex shows up requesting that she buy his half of the camp from him so he can have the funds to start his new life with his mistress.

But that’s just about MacKenzie…

There are also the counselors crushing on each other; mean girls and frat bullies; teen boys obsessed with sex; new kids trying to fit in; parents looking to drink the summer away; kids looking for new starts (one is recovering from a serious illness and another from topless internet photos); and of course, a few romantic hookups… in cars.

Sounds like the traditional and clichéd summer camp, right?

USA’s Summer Camp is not a drama, or a comedy, but a reality competition.   Sixteen strangers (plus a camp director/host) gather at a remote and abandoned summer camp (but don’t worry, it’s not Friday the 13th-ish abandoned) to relive some of their fondest camp moments… as an adult.

Divided into two camps, boys versus girls, the two battle head to head in different and typical summer camp challenges known as the “color wars” (women are red and men yellow).  The losing team has to banish two of its members to the opposing camp, where that group will decide who gets to stay and who exits the game.  Each week, the camps elect a new “camp counselor,” or team leader, who is safe from eviction and single-handedly responsible for the camp’s two nominations for banishment… if they lose.  Needless to say, being camp counselor is not an ideal position for the team that comes out on bottom.

As with most reality competitions, the group of contestants range from one end of the spectrum to the other.  We have a pageant queen, a firefighter, a female bodybuilder, a hunter, a soldier, a cowboy (who also happens to be a virgin), a Broadway performer, a self-proclaimed mean girl, and a model.  The show has also slapped stereotypes on a few of the contestants, such as: the sci-fi nerd, the geek, the smart @$$, the class clown, the flirt, and the country girl.  So far, I think I like the sci-fi nerd and the geek more than anyone…

Besides the fact that the teams are staying in the nicest summer camp cabins I’ve ever seen (equipped with the traditional bunk beds, but also with really nice “sitting” areas), the camp life does seem a bit like “real” summer camp—they eat in a gigantic mess hall; they have to trek through the park to use the restrooms and shower; and they gather for fun group activities around the lake, pool, and recreation room.

But bottom line, this is a competition.  A competition worth $250,000.  Everyone is there to relive camp life… party, hook up, and enjoy themselves… but really; they will do anything to win that money.

If I had to choose between NBC’s Camp and USA’s Summer Camp, I honestly don’t know which direction I’d go.  They’re both “okay.”  Neither is one to write home about.  Besides the constant adult themes, I’d say Camp is more family oriented…  and if the contestants’ vocabulary and actions weren’t as raunchy as they are, I’d say Summer Camp is good summer fun… so I don’t know.

Personally, I won’t be upset if I miss either of them.  But also knowing me, I’ll catch more episodes of both.

However, just because I’m watching them, doesn’t mean either show is the best on TV this summer.  So far that goes to Ray Donovan.

How about you?  Did you catch NBC’s Camp or USA’s Summer Camp?  Which do you prefer and why?  Have any fun summer camp memories to share?  I’d love to hear from you!

2 Replies to “Battle of the Summer Camps”