Today I’m jumping in with one the CW’s new shows this season—The Tomorrow People.

The CW Summary: Taking a chance and listening to the persistent voice in his head, Stephen Jameson ends up meeting a group of genetically advanced people with supernatural abilities, and not only learns about himself, but the truth behind his father’s disappearance.

Based on the British series of the same name, The Tomorrow People follows a group of kids who have evolved into the supernatural with special abilities.  And while these select few were born with their special powers, it takes some time for the realization of these unique abilities to evolve.  Take teenager Stephen Jameson for example…

Stephen (played by Robbie Amell, “Fred” from the Scooby-Doo! TV movies) was just a normal teenage boy by all accounts until he starts hearing voices and waking up in strange places.  He thinks he is going crazy like his dad, who disappeared when he was just eight, but it turns out he is not crazy.  He has latent powers starting to emerge—telepathy, telekinesis, and teleportation (the Three Ts).  After fighting it as long as he can, Stephen gives in and decides to listen to one of the voices in his head… and this voice leads him to The Tomorrow People, a genetically advanced group (John, Cara, and Russell) with powers very similar to his. 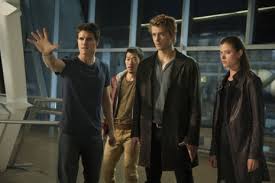 The Tomorrow People all share the same or similar genetic mutations that awaken during the adolescent years.  They are not superheroes; they are a hunted species trying to survive.  But in order for them to survive, they must outsmart the group hunting them—a group of scientists called Ultra (led by Stephen’s uncle—Jedikiah).

As one would expect, the government wants The Tomorrow People neutralized, so they set up Ultra to contain them.  Ultra uses captured Tomorrow People as agents to hunt the others down.  There’s just one catch—Tomorrow People can’t kill anyone.  An organic high frequency squeal that only they can hear interacts with their powers, causing them to have killer headaches when they come close to killing.  But that doesn’t stop Ultra from capturing and killing them.

The new supernatural drama also stars: Luke Mitchell (the cute Australian actor from Neighbours) as John; Peyton List (Mad Men and FlashForward) as Cara; Aaron Yoo (Disturbia and the remake of Friday the 13th) as Russell; and Mark Pellegrino (Supernatural, the US version of Being Human, Dexter, and The Closer) as Jedikiah. 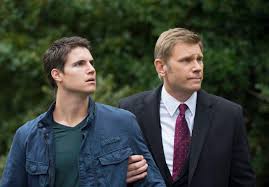 The Tomorrow People is one of the rare television shows that interested both my guy and me from the very first time we saw the trailer.  He was on board because it looked supernaturalish… and it is.  Actually, the effects are pretty darn good for TV.  And I was on board because of the pretty people.  Hey, what can I say?

Actually, one of the first things that intrigued me was the lead actor’s name—Robbie Amell.  Amell.  Sound familiar?  It should… Stephen Amell is the star of the hit CW series Arrow.  And I love me some Stephen Amell. 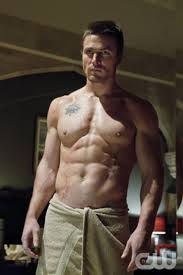 Anyway, the name is not a coincidence.  The two men are cousins.  But enough about that…

Now well into the season, I’m awarding The Tomorrow People with the JFTV rating.  It’s not my favorite CW program, but I do enjoy it and I will keep going back for more as time permits (I am a bit behind and need to catch up).

What do you think—do you watch The Tomorrow People?  I’d love to hear from you!