This week, Amber West and I flip channels over to the revamped AMC and discuss a few of the channel’s new original programs in this week’s Why It’s Worth a Watch Wednesday as we review the very popular Mad Men and The Walking Dead. 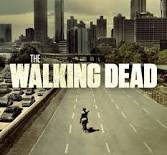 The supernatural element is taking over the television world today, and AMC joins this phenomenon by telling the story of a small group of people working feverishly to survive a widespread zombie epidemic in the great state of Georgia in The Walking Dead.  The series begins with small town sheriff Rick Grimes (Andrew Lincoln) waking from a coma to discover he is alone in every sense of the word: the hospital is desolate, the town looks like a post-apocalyptic war zone, and his family has vanished.

A man and his son save the deliriously weak Rick from his first encounter with a walker, or zombie as we know it, and nurse him back to health while educating him on the events that transpired while he was recovering from a gunshot wound suffered weeks earlier while on the job.  The outlook appears bleak, but Rick insists his family is alive and sets out for Atlanta to find his wife and son.

Meanwhile, Rick’s wife Lori (Sarah Wayne Callies), son Carl, and his partner and best friend Shane (Jon Bernthal) flee the city hoping to reach the Center for Disease Control to seek refuge.   While trapped in traffic, Lori and Shane witness the US military’s bombing of downtown Atlanta and all hope fades.  They join others and set up camp outside Atlanta to assess just how bad the damage really is before proceeding into the city. 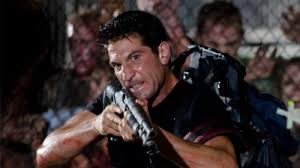 Beginning his track to Atlanta, Rick borrows a horse from a nearby farm and rides unknowingly into the city where he finds himself trapped in a tank surrounded by walkers, hundreds of walkers.  Miraculously, he hears a voice over the radio and follows the man’s instructions (Glenn played by Steven Yeun) to safety, but the horse isn’t so lucky.

Warning: The Walking Dead is a bit graphic at times.  Honestly, I almost stopped watching at this point; I did not like seeing the walkers devour the horse.

Now, back to the story…

Glenn is not the only human in the city; fellow survivors Andrea (Laurie Holden), Merle (Michael Rooker), and T-Dog (IronE Singleton) are hiding out inside a department store attempting to make their way back with supplies to the camp site, ironically the same camp site where Rick’s family is holed up.  Rick immediately establishes himself as the team leader, and after a small mishap, everyone escapes but Merle. 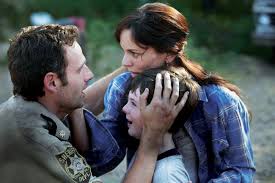 Rick reunites with his family, unaware of the intimate relations shared between Lori and Shane (in their defense, they assumed Rick was dead). After only a few short days at camp, the men make a final attempt to go back into the city to rescue Merle.  Working with Merle’s brother Daryl (Norman Reedus), the survivors find the remains of a sawed-off hand where Merle was last seen handcuffed.  Despite the fact that Merle’s demise is almost certain, Daryl buries the hatchet and decides to work with the rest of the men, utilizing his vast knowledge of hunting and experienced survival skills against the zombies.

After the camp is infiltrated by a group of walkers and a few lives are lost, the survivors retreat, pack up and head out.  And so the journey begins….or continues in this case.

The first season of The Walking Dead is only six episodes, making it perfect for a marathon style viewing party (that’s what we did).  And don’t worry; season two is now airing on AMC.

How popular is The Walking Dead?  Two episodes into this season, AMC announced it picked up a third.

Therefore, I’m taking a page out of Amber’s book and I’m combining the two – The Walking Dead earns a TBP rating (Twice Baked Potato).  It’s not predictable like most television programs, making it absolutely delish with all of the combined flavors of butter, sour cream, cheese, chives, and bacon, but it’s still not good for our cholesterol at all (just like our favorite bag of greasy potato chips). 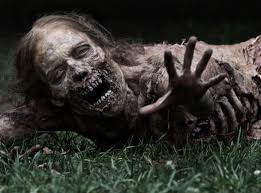 So, what do you think?  Do you watch The Walking Dead?  Do you find it bizarre that knowing what we know today, the characters never once refer to the Walkers as Zombies?  Will humanity win out, or will the walker epidemic claim the rest of the survivors?  I’d love to hear from you!

Now click over to Amber’s blog and check out her review of the incredibly sexy Jon Hamm, I mean the TV series, Mad Men.

Come back next week when Amber and I review our DVR Priorities in a special Why It’s Worth a Watch Wednesday edition.