During the summer months, we are busier than usual.  Not only do we find ways to deal with the heat, like making frequent trips to the pool and water parks, but we also gather up the troops and travel to fun and sunny destinations.  All of these activities pull us outside and take us away from our televisions.  For our household, this leaves our DVR queue full.

One might ask, how in the world can your DVR queue be full right now?  Despite it not being the typical television season of September through May, we still find ourselves recording at least a few programs per night.  Most of the shows we are currently recording come courtesy of TNT and USA, but there are also a few others…

So, for the sake of today’s post, I’m going to share my absolute must see series in a special summer edition of a Pick or Two Per Night… okay, maybe three in some instances. This picture is missing the hotness of Alcide, but I think everyone gets the point.

But where I say True Blood, my guy would argue Falling Skies… And I must admit, the sci-fi hit about aliens invading our planet is growing on me.

And before we go to bed, we take a quick hit of Weeds… Sorry, I couldn’t resist the pun… I started this series late and then went back and caught up courtesy of Netflix.  Having watched every single episode, I must say that I am VERY pleased The Closer is bringing back “the one” that got away… will Brenda Leigh finally find the evidence to arrest Stroh in these final six episodes?

Then, we end the night with an hour of Teen Wolf… 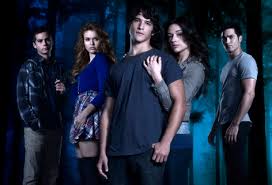 Everyone knows there are werewolves in this series, but without giving too much away, I just want to add that I love the addition of the lizard-like thing this year.  Plus the battle between Scott’s “army” and Derek’s “army” only adds to this TV with bite.  Who will win?  Probably Scott, but as long as Derek gets lots of screen time, we’re all good! Neal Caffrey is hands-down my favorite con-man on TV…

Plus, I always have to find time to sneak in my teen mystery fave… Pretty Little Liars You know… because it has football. 🙂 They may be unconventional, but they are totally lawyers! I watch for Michael Westen; but I honestly love Sam, Maddie, Jesse, and Fi just as much… My guy can’t get enough of Sam Axe (he’s a big Evil Dead fan). Even though this would NEVER happen in “real” life… someone without a law degree working as an associate at a major law firm… when the managing partner knows his secret… but it’s great TV!

Wes and Travis are really growing on me, especially when they role play…. and my guy laughs his rear off in every episode.

Late Friday night and continuing through Sunday, we cram a lot more into our weekend television viewing.  Come back next week to see just how insanely long that list is… trust me, it’s long.

And in addition to the list of shows above that are or will soon be on my DVR queue, perhaps my favorite summer obsession starts this Thursday… Big Brother airs one-hour episodes Wednesday, Thursday, and Sunday nights on CBS, PLUS three hours of unedited and live footage every night of the week on Showtime.