Amber West and I are back with Netflix on this week’s Why It’s Worth a Watch Wednesday.  Courtesy of all the programs that television has to offer, we’ve got a few more series that are definitely worthy of queuing up!

I’m taking a trip down memory lane and recommending one of, if not the greatest television Whodunit mysteries of our time: Twin Peaks.

Remember Dallas’ ever-so famous mystery back in 1980: Who shot J.R.?

The 1990’s wasn’t far behind with its very own unique conversation starter: Who killed Laura Palmer?

And then the hook – a teenage girl’s dead body is found wrapped tightly in clear plastic on the bank of the town’s river.  The sheriff and town doctor arrive only to identify the body as Laura Palmer (Sheryl Lee), the local homecoming queen. 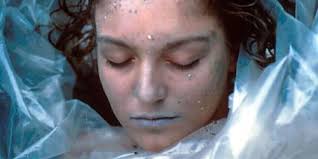 News of Laura’s death quickly spreads across Twin Peaks.  We see the devastation the news brings to her mother (Sarah Palmer played by Grace Zabriskie) and father (Leland Palmer played by the great Ray Wise).  Both of Laura’s parents suffer some sort of breakdown – Leland sporadically breaks into song and dance and his hair turns white overnight, while Sarah begins seeing psychic visions of a white horse and a long-haired man.

We also watch Laura’s high school classmates cry when the announcement pours through the loud-speaker.  Sadness sweeps through the school, and the crazy begins.  For example, Laura’s boyfriend, Bobby, begins howling like a dog – and this is just episode one.

Enter FBI Special Agent Dale Cooper (Kyle MacLachlan). Agent Cooper is a very special, or shall I say odd, individual.  His peculiarities fit right in with the bizarre townsfolk of Twin Peaks, but more on those individuals later.  When satisfied, he enjoys giving a thumbs up, he loves a good piece of pie and cup of coffee, and he constantly records case notes into his microphone addressing someone named Diane.  Quirkiness aside, Agent Cooper is one heck of an investigator. 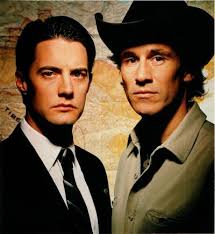 Almost immediately, they learn that Laura is not quite who she appeared to be.  Everyone knew she was dating the football star, Bobby Briggs (Dana Ashbrook), but only her best friend, Donna Hayward (originally played by Lara Flynn Boyle, and later by Moira Kelly), knew that Laura was also seeing supposed bad-boy, James Hurley (James Marshall). 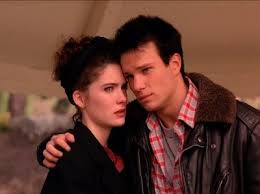 Next, Agent Cooper and Sheriff Truman discover that not only was Laura in the middle of a love triangle with the teenage boys, she was also working as a prostitute for Leo Johnson (Eric Da Re) and Jacque Renault (Walter Olkewicz).

The twists and turns don’t stop there.  It seems every single person in the small town of Twin Peaks has some secret of their very own.  Well, if not a secret, they are so weird that they can’t be excluded from the investigation (like the lady who carries around a log as if it’s a child).  The cast of characters in Twin Peaks is one of the best ensembles I’ve ever had the privilege of seeing on television, that’s for sure.  And the acting skills? Simply superb.

Twin Peaks also introduced a young and talented cast.  In addition to Laura, Donna, Bobby, and James, alumni also include the beautiful Sherilyn Fenn (Audrey Horne) and Madchen Amick (Shelly Johnson).   The female cast was so hot that even Rolling Stone Magazine featured them on the 1990 College Special.

The success of the television series spawned numerous Emmy and Golden Globe Awards.  It also prompted a prequel motion picture, Twin Peaks: Fire Walk with Me, and book stores sold The Secret Diary of Laura Palmer (I have that somewhere…).

Twin Peaks can only be described now as a cult classic.

Lynch and Frost’s masterful whodunit mystery kept me on the edge of my seat week in and week out in the early ‘90s; therefore, I’d be remiss to not give Twin Peaks a GTV rating.  When viewers learn who the murderer actually is, it’s shocking.  One can also get lost watching the colorful characters like Ed’s crazy patch-wearing wife who thinks she’s still in high school.

The plot, characters, and conflict of Twin Peaks are unlike anything on television today.

If asked what my favorite television program of all time, I’d say Twin Peaks.  I may be dating myself a bit, but I proudly own the entire series on VHS.  Of course, I no longer have a working VHS player in the house….but I sometimes am lucky enough to find Twin Peaks marathons on Chiller. 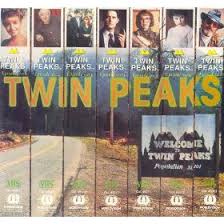 And, as much as I love Twin Peaks, I have to tell you that the series lost its flare once the murder of Laura Palmer was solved.  But, regardless, it’s only 30 episodes – so I highly recommend you Queue It Up!

The USA Network’s hit television series, Psych, honored Twin Peaks last year in probably my favorite episode: “Dual Spires”.  James Roday outdid himself writing the episode: he perfected the oddities of the characters from Lynch’s bizarre murder mystery; he mimicked the eerie music and peculiar dancing to a “T”; and, he incorporated a few of the Twin Peaks iconic elements such as the dead girl’s body wrapped in plastic found by the water, the diner, the log lady, the caged bird, and the pie.

Fox’s Fringe has also paid homage to Twin Peaks.  Walter Bishop has worn Dr. Jacoby’s famous glasses with one red lens and one blue lens, and he also dated the actress who played Josie Packard (Joan Chen) in one episode.

If so many current day television programs honor Twin Peaks, shouldn’t you at least check it out?  Seriously, queue it up!

So, how about you – did you watch Twin Peaks?  Did you figure out the mystery or were you surprised?  What is your favorite aspect of the series – the mystery, the unique characters, or the constant intermingling of character conflicts?  Are you a David Lynch fan?  I’d love to hear from you! *Please try not to give away any spoilers here for those who haven’t watched it yet *

Now click over to Amber’s blog and see why she recommends everyone queue up BBC’s Sherlock!

Come back next week when Amber and I review a few of our favorite FOX programs returning this fall – House & Bones.

36 Replies to “Why It’s Worth a Watch Wednesday – Seriously, Queue This Up!”